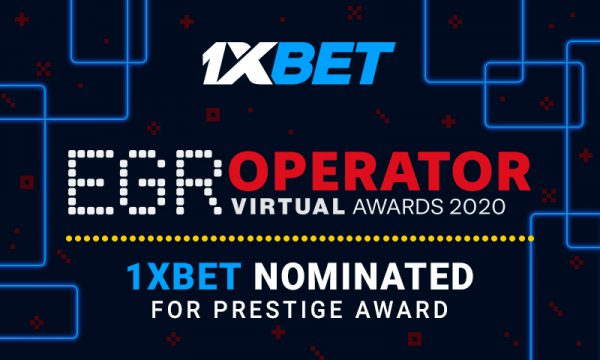 1xBet may be declared “eSports Operator” at the upcoming prestigious EGR Operator Awards. The company was shortlisted for the award along with 7 other reputable contenders. The name of the winner will be announced during a special online ceremony on November 11th-12th, 2020.

“We are very pleased to be among the nominees for such an important award. It is not the first time that 1xBet has been nominated for an international award – in fact, we have already won a  number of prestigious awards. Yet, the recognition is an honour each time. It’s an indicator that we are moving in the right direction and that the efforts of 1xBet are appreciated not only by our players but also by internationally renowned experts.

It should be said that we are especially pleased to be nominated in this specific category, which is increasing in relevance every year. Esports is gaining more and more fans who see it as an opportunity for fun and excitement. We give such fans the chance to support their favourites and win together with them. Therefore, we will continue to make every possible effort to develop this area, ”- said 1xBet in a statement.

The jury traditionally comprises of reputable representatives of the betting industry. Their names have not been released to maintain an impartial vote. The procedure itself and its results are calculated with assistance from the famous auditing company Deloitte.

1xBet has quickly become one of the industry leaders since being founded in 2007. This became possible, among other factors, due to a powerful affiliate program, which has more than 50 thousand members who receive weekly payments and a lifetime commission from each of their referred players.

The bookmaker’s recent accolades and recognition are confirmation of the attention the company pays to esports. Every month 1xBet invites players to place bets on thousands of events on the website and in the mobile application. The company is an official partner of such well-known esports organisations as NAVI, HellRaisers and Cascade.

The EGR Operator Awards have been hosted by the renowned EGR magazine (eGaming Review) since 2019. The status of the magazine allowed the awards ceremony, despite its young age, to be lauded as one of the most prestigious in the gambling industry. This year the winners will be determined in 28 categories.

1xBet is an official sponsor of the SiGMA Americas virtual conference
SEO optimization: how to get your content on the first page of Google

Partners-1xBet may use cookies to store your details and collect information to optimize the site and tailor our marketing to your permissions and to suit your interests. By continuing to use the site you consent to the use of cookies. Find out more